I’ve been doing a lot of motion blur lately while out walking or waiting for the bus. This crossing gets a lot of traffic at the top of the hour, but I have hitherto preferred to capture a few people crossing rather than the great mass of pedestrians. 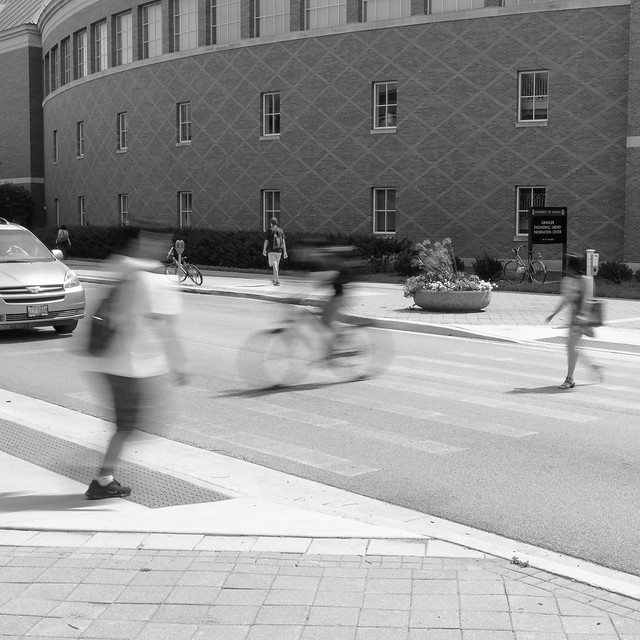 Bikes and cars both offer longer lines at the (relatively) fast shutter speeds I use when handholding my X100: 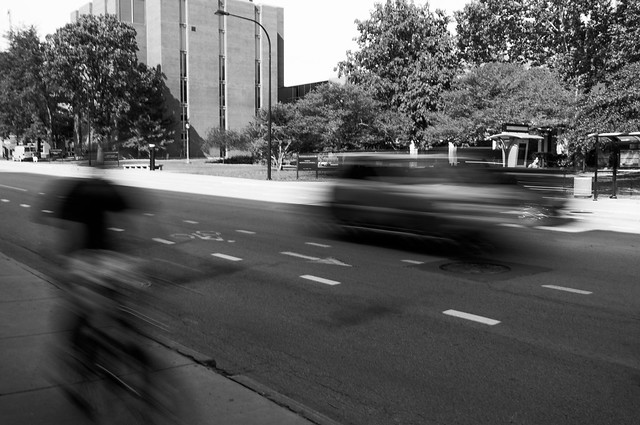 I can reliably handhold the X100 down to about 1/8 second, if I tuck my elbows, hold my breath after exhaling, and don’t mash the shutter. As a friend of mine described it, it’s like fusing video with still photography: the motion is clearly expressed against a sharp background. 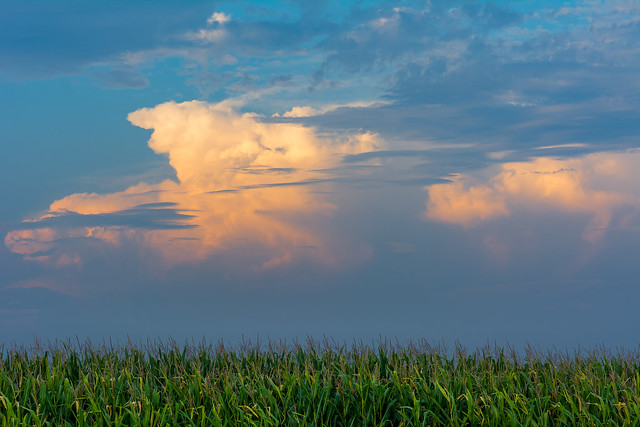 It’s been a little while since I wrote about portraits, and wouldn’t you know, I have a couple recent ones. 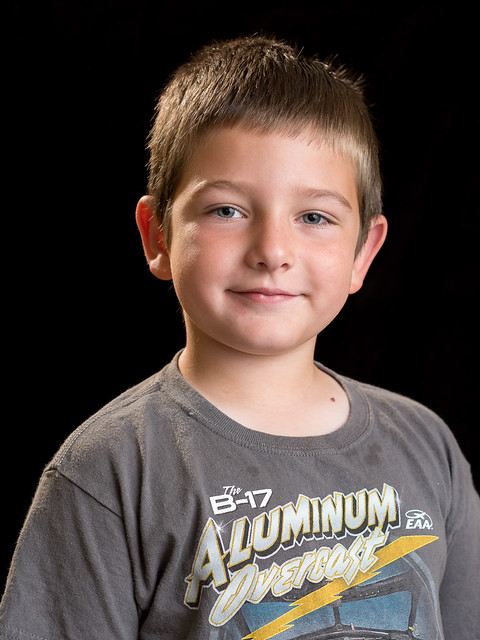 I make at least one portrait of my children every year, as close to their birthdays as possible. “As close as possible” was almost three weeks afterward this year for my older son, pictured above, because of paternal inertia. The delay had its benefits, though; I was able to mentally discard several unnecessarily complex ideas in favor of something simple and attractive. A secondary goal was to create something that would look good both in monochrome and color.

We have here a variation on my favorite two-light setup, with a large soft key (the 60″ Photek Softlighter) balanced by a harder separation light, with a pure black background. The separation light is warmed both with a 1/4 CTS gel and by setting flash white balance rather than daylight. The key light’s color is unmodified.

Normally, I use a bare speedlight for separation, but this time I wanted a slightly softer edge to the separation transfer, so I strapped a LumiQuest SoftBox III to the front of my strobe. I’m extremely pleased with the result; so pleased, in fact, that I’m inclined to use the SoftBox in preference to a bare strobe from here on out, unless I absolutely need the harder edge. 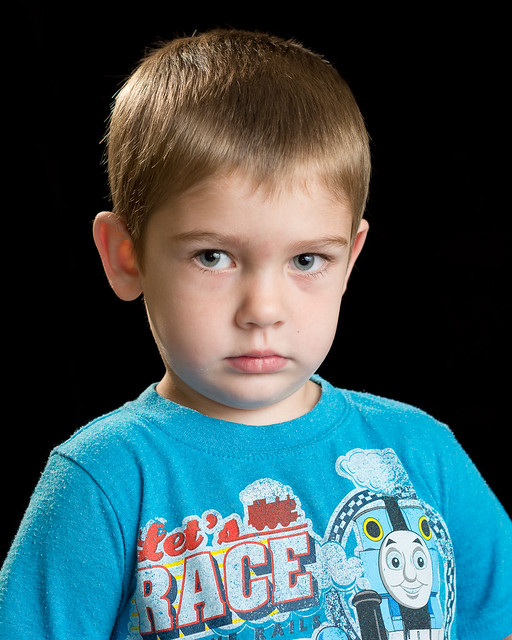 My younger son wanted in on the action too, of course. I made things easier for both of them by using gaffer’s tape to mark where they should stand on the floor, something which I’ve never done before but should have been doing all along.

The background is a piece of black velvet curtain which I bought from a local hobby store, attached to and draped over a tall bookshelf. Since it’s supposed to be pure, textureless black, I was able to push the contrast a little harder in these images than I would have otherwise, resulting in a palette of tones I really like. I haven’t shared the monochrome versions in deference to my mother, who prefers color portraits of her grandsons, but the B&W conversion is every bit as pretty as the originals. 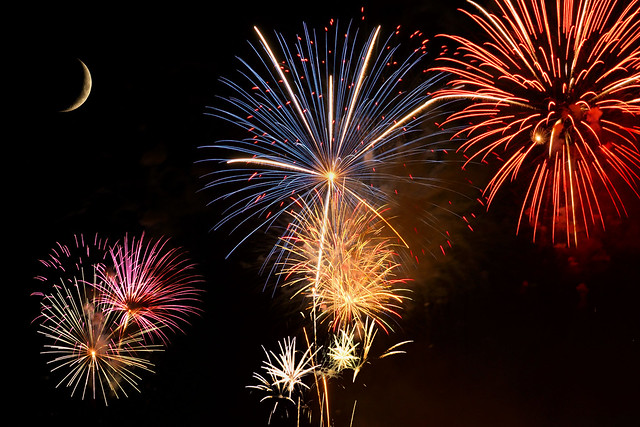 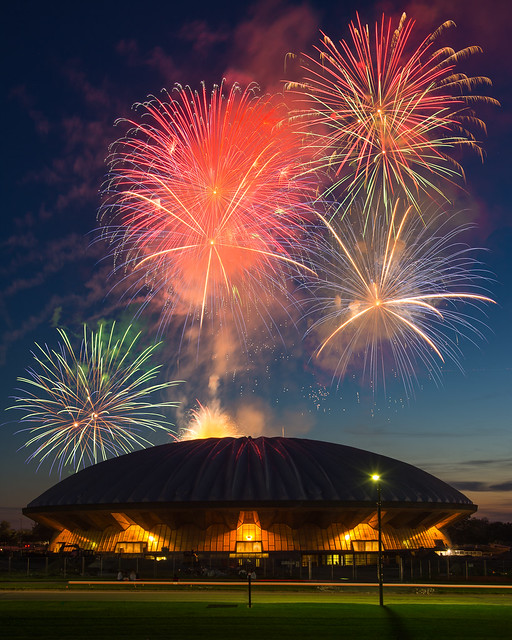 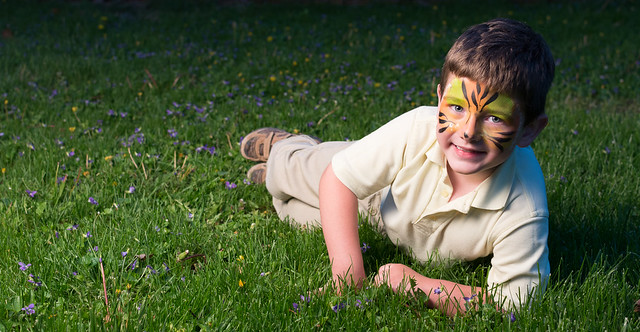 I was flabbergasted when my son not only let his face be painted at a carnival, but enjoyed it. A picture had to be taken. By the time we got home, my back yard was in full twilight shade, and I seized upon a warm/cool color contrast for the image. The key light was diffused with a shoot-through umbrella and had its color shifted with a CTO (Color Temperature Orange) gel. Temperature and mood are inverses of each other, of course: blue is high temperature but “cool” in mood, while orange is low temperature but “warm” in mood. By using the CTO and setting a manual white balance, I could warm the light on my son while shifting the ambient to a pleasing blue, suggestive of the time of day. 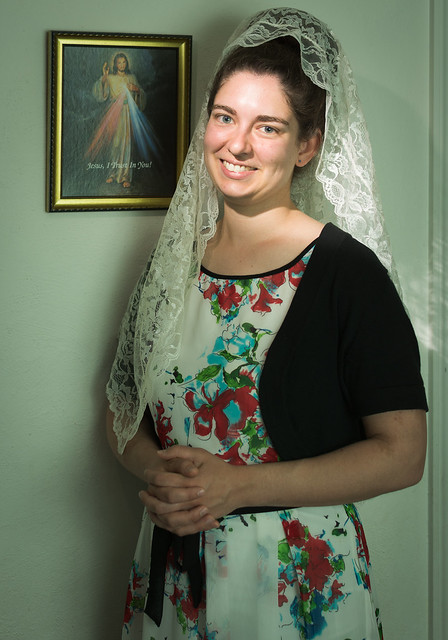 For Christmas, my sister-in-law had given my wife a hairstyling device to ease the production of hair buns, and when she tried it out one morning her silhouette screamed “this needs a mantilla.”

Here we see a slight modification of my favorite color portrait look: low-saturation green fill with a hard warm key. As previously discussed, greening up the fill light (1/2 Plusgreen, in this case) prevents the shadowed skin from going magenta, while a warm key (1/4 Color Temperature Straw, a less-red version of CTO) establishes a reference skin tone that is subconsciously applied to the shadow areas as well. In this image, the color combination is also evocative of older color negative film, an appropriate choice for the subject as attired.

I have not yet moved beyond the “bag of tricks” method for controlling color in my portraits. It’s OK for now, but I want to develop more mastery over the medium, so as to let the nature of the subject determine what colors should be used.

On the same trip to the Chicago ‘burbs where I enjoyed a bit of planespotting, we took the kids to play one afternoon at a connected chain of parks along Salt Creek in Rolling Meadows. I was given a furlough to split off and take pictures, and happened upon a gnarled old willow tree with some really interesting stuff going on in its bark.

There’s something here that reminds me of a pāhoehoe flow overwhelming a higher dike or ridge of rock. I’m not entirely satisfied with my control of depth-of-field in this image, and I hope to go back sometime and try again…maybe with a rented tilt-shift lens?

Summer may be the university’s slow season, but that doesn’t mean a few students aren’t around. Some of those who study take advantage of the warmer weather to sit under a tree while doing so:

Stealth was essential to getting this shot. As usual, I was carrying my X100, so I had to get in close to make the foreground student big enough, while keeping enough distance not to spook him. At original resolution there was just a little too much foreground for comfort; changing from 3:2 to 16:9 solved that problem. A host of tweaks then followed: reduced saturation and a couple slight color shifts, vignette, dodging the foreground student to bring more attention to him, and cloning out a couple extraneous elements on the edges. More than I normally do, for sure, but this image is as much about the surroundings as it is about the student. The details are everything.

Posted on May 27, 2013May 28, 2013 Posted in UncategorizedTagged control, flash, foodLeave a comment

I wanted to scan and publish a picture of my dad when he was in the Air Force as my tribute for Memorial Day, but that was impossible for technical reasons. Instead, here’s a drink I raised this evening to my dad, my great-uncle, and everyone else who has served the United States in uniform:

The drink is my variant of one of the few decent blue tropicals: tequila, lime, orgeat, maraschino, Cointreau, and a drop of blue food dye. The light is an interesting mix I’ve never tried before: tungsten ambient, with an ungelled flash held by my wife to make the glass glow a little bit, processed with tungsten white balance. The ungelled flash was a deliberate choice, as I knew the tungsten white balance would render it bluish — perfect for emphasizing the color of the cocktail.

Posted on May 19, 2013May 24, 2013 Posted in UncategorizedTagged black and white, control, photowalkLeave a comment

I went out for a stroll at lunch late last week and walked down to the Boneyard Creek behind the Everitt Lab machine shop:

The rocks in the stream caught my eye here. When I reviewed this exposure on-camera at the end of the day, I was not impressed, but I let it sit for another couple days before reviewing it on my computer, at which point I saw that cropping from 3:2 to 16:9 would eliminate an anomalous bright reflection and improve the image. Some basic lens correction, tonal adjustments, and sharpening were quickly applied, but there wasn’t enough local contrast; the water and rocks did not have enough separation. I was feeling stymied and about to give up when it hit me: gee, why don’t you burn in the water, dummy? Photoshop not needed; Lightroom’s Adjustment Brush did exactly what I wanted. I might further tweak the dry tops of the rocks; as it is, they have subtle high-value gradations that could need help to print well.

I haven’t decided if the rocks are more interesting by themselves or in the full context of the channel with landscaped banks. I may go back for another try with a different lens.

Posted on April 4, 2013May 23, 2013 Posted in UncategorizedTagged church, control, lightingLeave a comment

Having discussed multiple attempts on a landscape subject, let’s talk about returning to an image in the studio, where we define “studio” broadly enough to include my dining room.