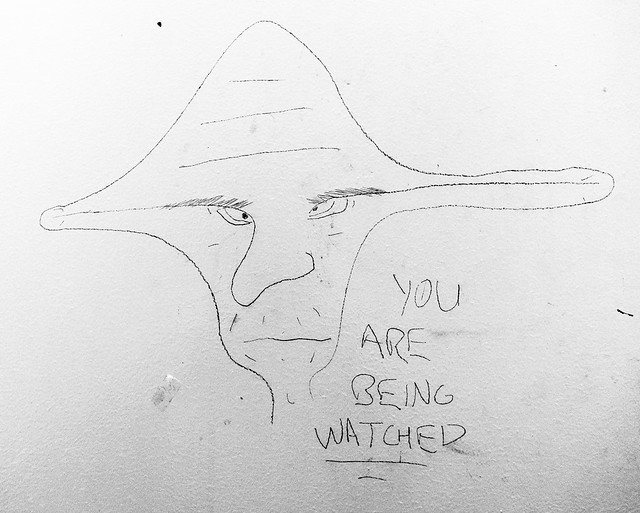 If you’re going to doodle on the stall door while occupied in the restroom, at least you can be artistic or witty rather than vulgar. 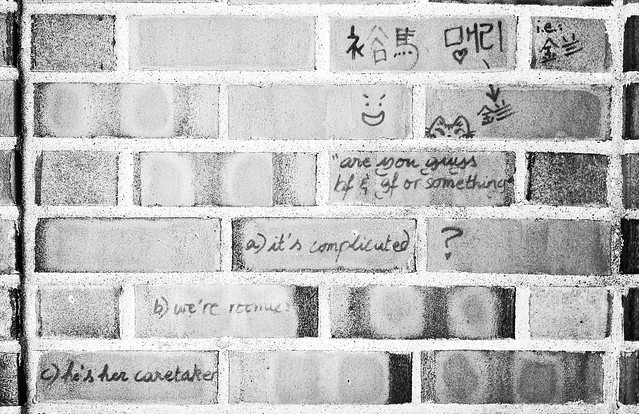 I almost missed this image; it was easy to miss on the shady side of a brick pillar, obscured by a tree branch. Snapseed’s red filter came through to bring out the text, just as the yellow filter helped some distant summer evening storm clouds. 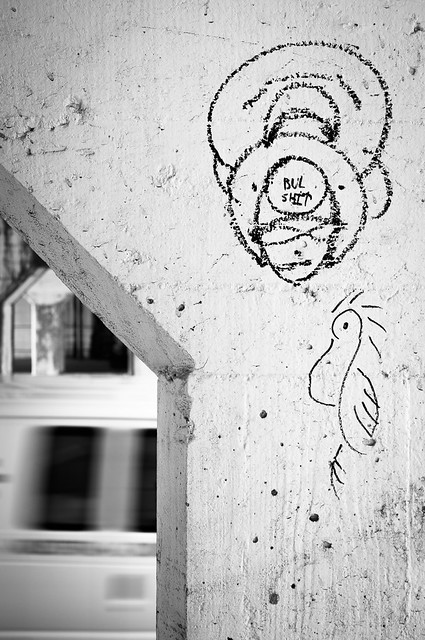 My output of graffiti photography has diminished greatly from its peak a few years back. Not sure why; maybe I’m just not seeing as much stuff that tickles my funny bone these days. This moment of Zen on the railroad viaduct over Springfield Avenue is a notable recent exception. 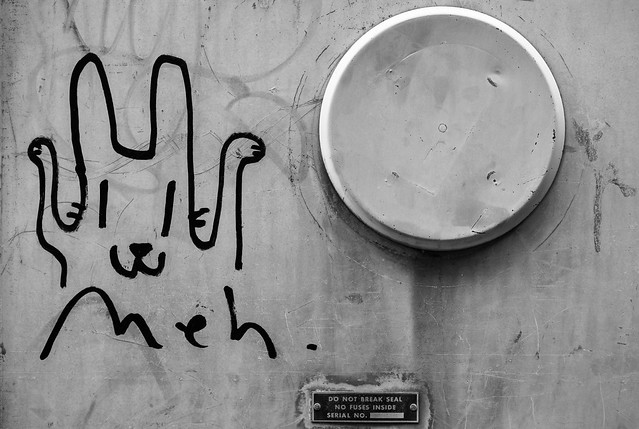 While waiting for the bakery in downtown Urbana to open, I wandered down a nearby alley and found this moment of zen nestled among several mains power interfaces. 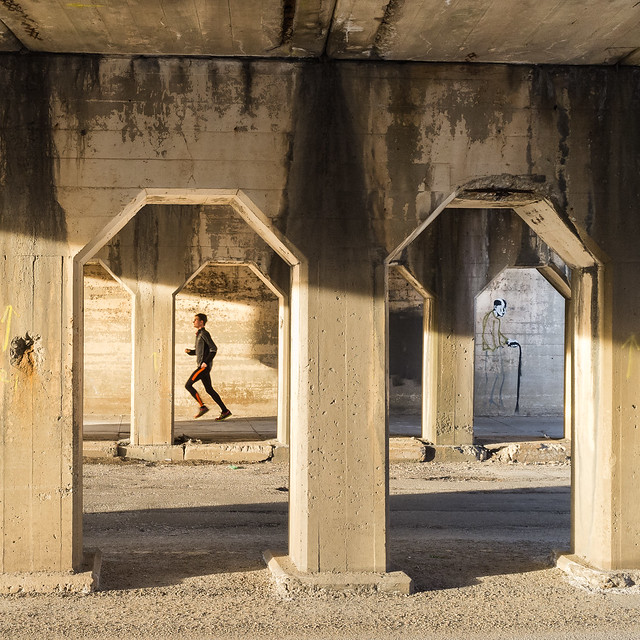 I had to walk under the Main Line of Mid-America one morning on the way to rescue my wife from a minor automotive emergency. We’ve seen the street art I call “Graffiti Dude” before. I was on the opposite side of the street from him this time, and the notion of pairing him with a pedestrian, framed within the overlapping arches of the viaduct, popped into my head. I had no time to wait and no camera on me that morning, but I held onto the idea until I found myself in the area again one evening, camera in hand.

A lot of dodging/burning was necessary to bring out just the right distribution of tones, but the sunset light worked much better than my original morning conception, and it prints very nicely at 17″ on my Epson 3880.

Contrary to the University of Illinois’ reputation for political disengagement, I found some more current affairs graffiti on a recent photowalk:

Sometimes one picture will trigger an association with another in my library, and the connection between them can be quite obscure. Our friends protesting the NSA above made me think of a picture taken last year that I finally decided to publish:

I leave articulating the connection between them as an exercise for the reader. 🙂

The Greeks were wise to relieve the intense catharsis of a tragic trilogy by appending a satyr-play to it. For me, at least, this experience of diachronicity needs comic relief:

I’m gradually coming to the conclusion that the most interesting part of photographing graffiti is not the images by themselves, but interactions between the images that are perceived by the photographer, and expressed by juxtaposition or collage. I’m curious to see if and how this idea alters my approach to my graffiti collection.

Most mailboxes, lampposts, and traffic signal control boxes around campus are decorated in this fashion:

However, very few walls are decorated in this fashion:

The University of Illinois was never a hotbed of political activism, even in the 1960s, so it’s probably not surprising that this is the first bit of current-affairs graffiti I’ve documented:

Posted on August 18, 2013 Posted in UncategorizedTagged doodles, graffitiLeave a comment

My enjoyment of photographing graffiti is well-attested, so it’s surprising that this bit of whiteboard art on a co-worker’s door had been around for a couple years before I photographed it:

This masterpiece was executed by one of our security people before he left and then came back. The disembodied marshmallow in the fire trail was once being held by a squirrel, but the unlucky varmint was erased before I took this picture. The artist has thought about adding him back in, so stay tuned….

Posted on May 26, 2013May 26, 2013 Posted in UncategorizedTagged graffiti, photowalk, serendipity1 Comment

To judge by my work, I have a thing for graffiti, especially if it’s pleasantly absurd or artistically executed. I photographed oodles of graffiti in Fall 2012, particularly on lunch breaks in November.

I originally published this image of a “canyon” between two apartment buildings in black-and-white, but now I think the color version has more impact, more emotion.

Evidently, someone or someones went on a coordinated campaign from Wright Street down the Boneyard Walkway at least as far as Fourth Street; signs similar to these (especially the PLS peace-love-smiley face one) can be found all along the route. These are on the Jerusalem Restaurant at Wright and Healey.

Here’s one I kept in monochrome, because I could get cool contrast effects with a blue filter. 🙂 The cow-with-a-parachute stencil is another favorite of the merry pranksters who decorated these several blocks.

One might be tempted to say that photographs of graffiti are just a subgenre of urbex/urban decay. I would disagree; at least in my mind, it’s more like preserving the work of another artist, or creating a derivative work from it. These images are not as pleasantly absurd as my bus-stop find, nor as artistic as Graffiti Dude, but I was able to compose something out of the symbols and their surroundings, which is sufficient for me.

I wish I knew who has been painting these men on the viaducts of the Main Line of Mid-America in Champaign and Savoy, although if I knew, it would probably be my civic duty to turn him in to the police. Maybe it’s good that I don’t know.

I first saw Graffiti Dude, as I call him, leaning on his cane while walking down Stadium Drive; apparently he then suffered some accident and required not just a cane but a walker to come out of the concrete at St. Mary’s Road. Late last week my wife advised me that he had appeareed again, this time carrying flowers on Windsor Road:

When reduced to a headshot, Graffiti Dude becomes Everyman, head down, plugging along:

Will he make another appearance? I’ve been looking for him on five other viaducts in town but have not seen him yet. If I do, the chronicle will continue.