Ven. Fulton J. Sheen possessed biritual faculties and knew how to celebrate (and celebrated) the Greek Divine Liturgy. This is his omophorion, the distinctive bishop’s liturgical garment in the Greek tradition, from the museum dedicated to him in Peoria, IL.

Earlier this summer we took a 2-week road trip to attend a conference (for me), visit family, and see the sights on the East Coast between Washington and Philadelphia. We also enjoy what I call “ecclesiastical tourism,” that is, looking for old or notable churches in the places we visit. Our trip did not disappoint. 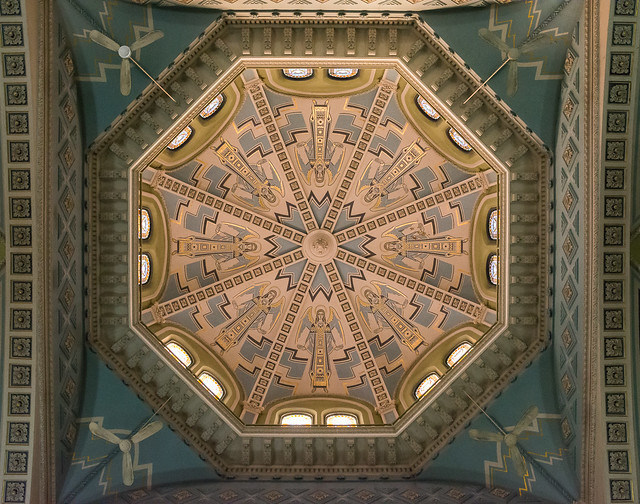 St. Nicholas Catholic Church in Zanesville, OH was built in 1898, a new Romanesque Revival building for a parish founded in 1842. The octagonal dome with its eight angels was quite an impressive sight. 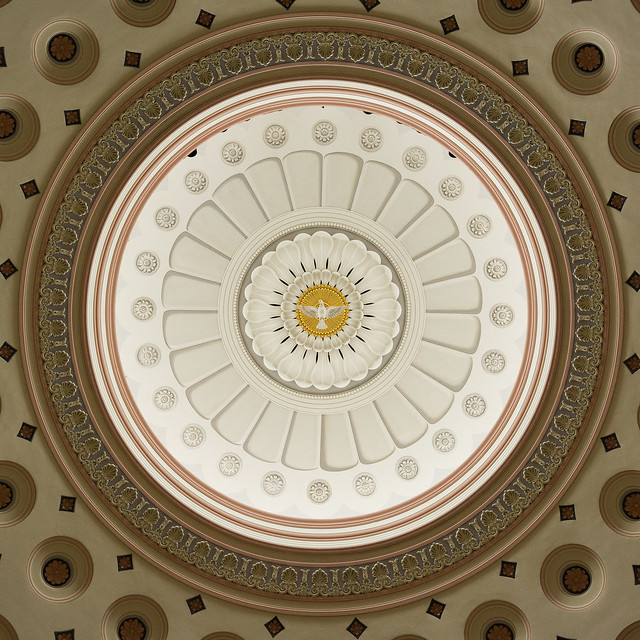 The Basilica of the National Shrine of the Assumption of the Blessed Virgin Mary in Baltimore, MD, better known as the Baltimore Basilica, is the first Catholic cathedral built in the United States. Designed by Benajmin Henry Latrobe and built between 1806 and 1821, it witnessed many important events in the history of the Church in America, including the Plenary Councils of Baltimore that gave us the Baltimore Catechism and the Catholic University of America.

Latrobe’s dome features a ring of windows which illuminate the medallion representing the Holy Spirit before the light is filtered down to the nave, giving the interior an open, airy feel. 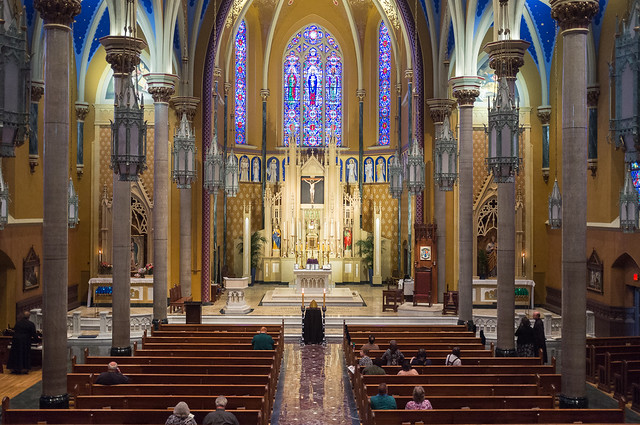 August 2016 marked the 100th anniversary of the death of John Lancaster Spalding, first Bishop of Peoria. The cathedral in Peoria had for some time been in need of repair and restoration, which was completed in time for this anniversary. The cathedral looks better than I’ve ever seen it, a beautiful mother church for the diocese and an offering to God. I also sing and direct Gregorian chant, and was asked to come with a choir to Peoria on the evening of August 24, 2016, for a Solemn Requiem Mass celebrated for Archbishop Spalding. Mass was celebrated in the Extraordinary Form, or “Tridentine” or “Latin Mass” as it is sometimes called, the way Mass was celebrated before 1964.

In the Extraordinary Form, funerals and memorial Masses without a body require a symbolic casket or platform, called a catafalque, surrounded by six candles as an actual casket with a body would be. The picture above depicts the catafalque for Archbishop Spalding: a simple black-draped pillar on which is placed a bishop’s mitre. Simple yet dignified and in keeping with the occasion.