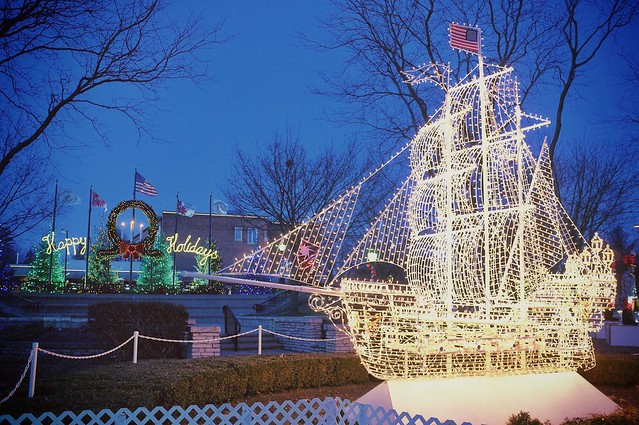 We went to visit my parents for my younger son’s birthday again after Christmas. As I did in 2013/14, I took my camera down to North School Park for some blue-hour pictures of the light displays. Alas, there was no snow this year to add a warm halo around the lights, which gave the scene a desolate quality I don’t usually associate with Christmas decorations. Perhaps, since I took the picture on New Year’s Eve, it projects the mingled excitement and melancholy one feels as the old year gives way to the new.

To all my readers/viewers, may your 2015 be happy and healthy.

When I posted before Christmas I mentioned wanting some pictures of Christmas lights. I was able to get them and realize a long-unfulfilled desire to photograph something in my home town at the same time.

North School Park in Arlington Heights, IL was built when I was in my early teens, and ever since it has been home during December to an elaborate display of Christmas lights. From the day I first read David Hobby’s guide to shooting Christmas lights, I have wanted to photograph North School Park in its winter glory, but could never quite make the time on multiple trips to visit my parents. I finally got my pictures last week, when we visited for my younger son’s birthday. Mother Nature was kind to me and (literally) iced the cake with a foot of snow. The train shown above, of course, is my kids’ favorite.

Capturing the windmill above took some trial and error, as well as defying diffraction with an aperture of f/22. I’m long overdue to buy some ND filters to allow longer exposures at smaller apertures.

By the time I took this frame, the twilight had deepened enough to give me 20 s @ f/16. Still need those ND filters….

It was when I edited these pictures that I finally decided I like my new D7100 a lot. Not that the D90 couldn’t have done a good job, but there is a combination of smoothness, sharpness, and deep dynamic range in the D7100 files that the D90 just can’t match. I’m looking forward to the next time I go photographing at dusk.

The family obligations I mentioned in my last post are now completed: my wife has earned the degree of Master of Music in Organ Performance. (We’ve seen her at the console before.) I’m still working my way back into some pictures, so let me reach into the archive for a shot from Black Friday 2011:

The idea of a long exposure to capture the essence of the first day of the Christmas Shopping Season suggested itself to me easily, but finding the right location was more difficult. In order not to cut off the top of the building I had to tilt the camera, which required perspective correction in post. Further, in order to be ready when the sunset was properly blending with the street and interior lights, I had to get there and get set up in advance. I do not remember just how long it took to find both the right light and the right mix of traffic passing, but it felt like more than an hour.

In retrospect, a neutral density filter might have been useful for this shot, to allow a slower shutter speed and more/longer light trails.

While I was shooting I attracted the attention of a writer for Shutterbug magazine, whose name I no longer remember. We had a nice chat about this and that, although I was glad when he left so I could focus more attention on photography. 🙂 This remains the only time I can remember that someone has come up to talk to me while I was photographing.

There; my toes are wet again. Let’s see if I can restart and post on a regular basis.

Holy Cross Catholic Church in Champaign is my parish, and I’m right proud of it. We have a strong and welcoming community with a gorgeous church and a talented organist, all guided by one of the Diocese of Peoria’s finest priests. We like to decorate big for Christmas, and things just get bigger when the Magi arrive.

Sadly, by the time I was able to take these pictures, the top half of the left-hand tree was no longer lit. I was not about to muck with the tree, so I turned to The GIMP when I got back to my workstation:

I’m proud of what I did, anyway.

This is my favorite of the images I took. When you place your creche under the church’s main crucifix, you’re almost hitting the congregation over the head with the link between Christmas and Good Friday; with this combination of lamb, poinsettias, and tree, I attempt the same connection but in a much more subtle fashion.

I find devotional photography a stimulating challenge, because with it I can pray and make images at the same time. I didn’t do as much of it last year as I would have liked; God willing, this year will be more fruitful.

Kids are great, aren’t they? Even when you turn around and the 11-month-old (who can already walk) has climbed up on the table (because you left without pushing in your chair) and is threatening the cookies Mommy just baked, kids are great. Kids take great snapshots, too, but can be the ultimate in frustration when you want a more posed or formal picture. Take the following of my son Joseph, for instance:

Since he learned to walk, Joey has been an unstoppable dynamo, a blur of incredible motion, faster than a speeding parent, able to leap tall tables in a single bound, etc. He doesn’t like to sit still, especially when he’s tired, which made my choice to take this picture late at night dubious to begin with. At first he wouldn’t sit in the chair, preferring to sit in a corner and play with his brother’s Thomas trains. My wife was on hand to cajole him, and after a while he agreed to sit in the chair and even look happy, if sleepy. Three frames later and he was on his way to bed. Moral: when photographing children, the three most important bits of gear are patience, patience, and patience. 🙂

When shooting portraits of my kids with added light, my best results have been made with simple light that sets up a “kill zone” into which the child may be maneuvered. In this picture I used one of my standard combinations: an umbrella high on one side, close in to aid fall-off on the background, and a hard light behind on the opposite side. The second light adds separation and definition to the edges; in this case it was placed at a shallower angle than I would normally use because of the geometry of the chair. I would have liked a softbox rather than an umbrella, which would have further limited the amount of fill added on the wall behind Joey’s head, but I don’t own one yet.

The trickiest bit was placing focus; I had turned off all lights except the Christmas tree, it was too dark to focus manually with Live View, and Joey didn’t like it when I used a flashlight on his face to assist AF. While he was being cajoled, I noticed a fold of the chair covering that I guessed was at the proper distance to place focus on his eyes. Using my flashlight, I focused on that, and God be praised, my guess was adequate.

All in all, not a bad session; I’ve had many worse.

The fantastic David Hobby, all praise be to him, got me started on controlling my light when taking a photograph, both when using strobe, and in other circumstances, as described in his wonderful guide on How To Photograph Christmas Lights. This house in the next subdivision caught my eye this year:

It looks great on screen but is very hard to print; it’s hard to make the foreground tree look like anything other than a solid patch of navy blue. By “developing” the RAW file to bring up the shadows by a couple of stops and combining two exposures in an image editor, values in the tree trunk can be made to stand out a bit more.