Skip to content
Posted on August 1, 2014August 1, 2014 Posted in UncategorizedTagged aircraft, b-17, black and white, family, planespottingLeave a comment

The Experimental Aircraft Association of Oshkosh, WI, owns a B-17 in flying condition. Every so often it makes its way down here, and I took the family to see it back in May. 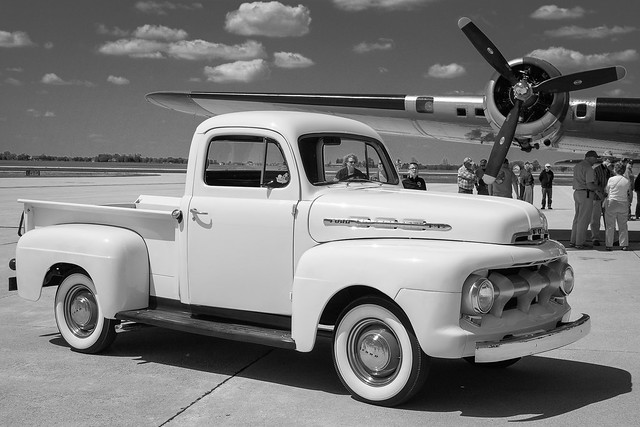 People who own antique vehicles usually put in an appearance during ground tours. This old Ford truck made for a fun bit of anachronism; trucks like this weren’t in production until the 1950s, by which time the B-17 was no longer in service, at least not for its original mission. 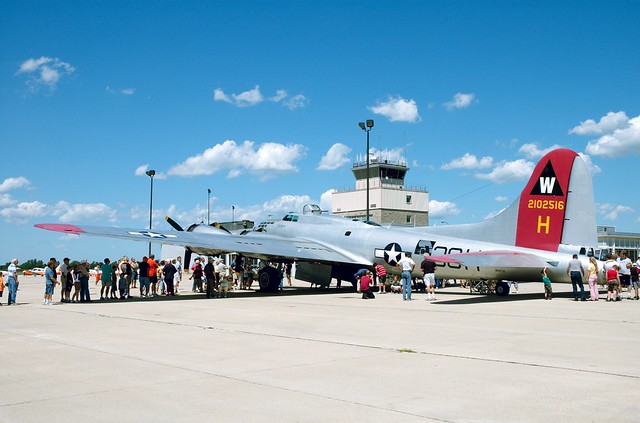 Here’s a more complete view of the bird from 6 years ago, when my older son was still in utero.

My great-uncle was a waist gunner on B-17s with the Fifteenth Air Force. While he didn’t fly this particular plane, it is a tangible contact with the history that Uncle Pete made, and I’m grateful that my children got to climb through it.

On a visit to my parents I took a little time out for lunch with a friend I hadn’t seen since high school, a self-employed IT guy who has a very successful consulting business in the Chicago area. The restaurant where we ate is right under one of the departure paths for O’Hare, and as luck would have it, one of United’s 747s flew over as I was waiting:

Since I was carrying my X100, I knew I had to use the bird as one point of interest within a broader composition. (I’d still have had to do the same with my Nikon, as I don’t own the very long lenses needed for true planespotting.) With the (relatively) short lens of the X100, the 747 feels much farther away than it really is, but take a closer look: the flaps and leading-edge slats are still extended, which means it only just took off.

Despite what air travel has become, moments like this remind me of how much I enjoyed it when I was a child and it was still an adventure.

Retroblogged and expanded from my LiveJournal post for 13 June 2011.

In the summer of 2008, just before my older son was born, the Experimental Aircraft Association of Oshkosh, WI brought one of the few surviving airworthy B-17s to Champaign. The B-17 is not the only old aircraft they maintain in flying condition; they also maintain a 1929 Ford Tri-Motor, and on June 12 it was at Frasca Field in Urbana. They were giving rides as well, so my father-in-law and I grabbed a couple of seats, and were soon barnstorming above Shampoo-Banana. It was noisy and much bumpier than a big commercial airliner, but lots of fun.

Despite the cliché, I couldn’t resist doing the full old-timey shtick on this image in post: monochrome and vignette. (Sepia would have been so far over the top that even I couldn’t stomach it.) I printed a copy for my father-in-law on Canson Infinity Arches Aquarelle Rag, a matte paper that beautifully suited the subject.

This is my favorite image from the day. It reduces the aircraft to form and line, with the wide lens exaggerating the dramatic forward thrust of the fuselage.