October 8’s total lunar eclipse caught me a bit flat-footed (“Wait — there’s an eclipse tomorrow?”) but I was determined to watch and photograph it. 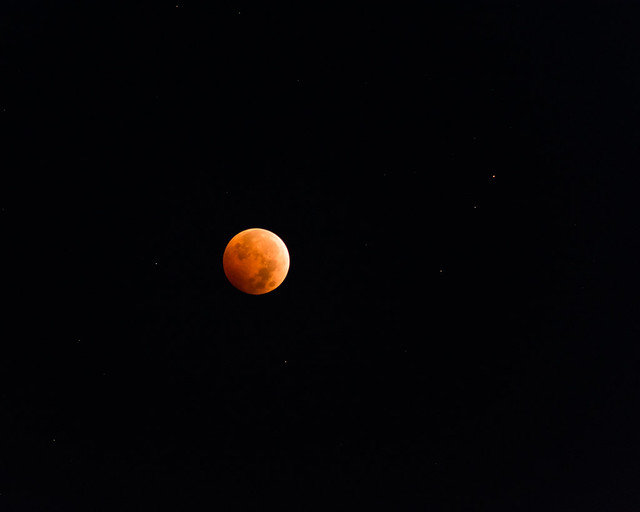 My nephew stayed over at our house the previous night, so we had to wrangle three boys into shoes, coats, and van, and thence a short way into the country. I did manage to pack my longest lens, which is not really long enough for this type of thing, but it’s the best I have. This image was made with an old slow 70-210mm zoom at full extension, f/5.6, high ISO, and manual focus via Live View.

The boys spent most of their time complaining about one thing or another, but they did see the eclipse, and I pointed out a few constellations too. Hopefully this won’t be our last celestial outing.

Posted on May 17, 2013May 17, 2013 Posted in UncategorizedTagged long exposure, night, serendipity, using available lightLeave a comment

A few Christmases back, we hung a string of lights on our mantelpiece, and we liked the effect so much that we left it up. (They’re not Christmas lights, they’re mood lights. 🙂 ) My mind quickly turned to thoughts of long-exposure camera-in-motion photographs. I took an evening to experiment, and out of 15 exposures, one was clearly superior to the others:

A friend subsequently challenged me to ride through the U of I campus with my camera set for a long exposure. It took some time to find the right opportunity, but when it came I was driving and we were not on campus. The idea was still a good idea, though, and once I explained it and prepared the camera, my wife was game to help out:

This next one got high marks from a friend who is a graphic designer and a good photographer in her own right:

First and (so far) only joint photographic project I’ve undertaken. Alicia, you were fabulous; I may have set up the camera but you chose where to point it, and you chose well.

All the images above were taken in 2010. For the next couple of years I noodled around from time to time with long exposures, not really trying and certainly not producing anything of value, until my wife was driving me home from work one very gloomy afternoon last fall:

After that little sortie into hyperspace I don’t know that I have much left to say with camera-in-motion exposures, but I’ll not say “never again.” Whenever I do, it always comes back to haunt me.

“90% of everything is crap.” When I consider my photographic output, I think the proverb is generous; 99% of the photographs I’ve taken are crap. All photographers take many more pictures than they keep, and even fewer of those get published. On his first assignment for National Geographic, Joe McNally shot about 1200 rolls of film (or 40,000+ exposures), only to edit down to 80 frames for publication. That’s an awful lot of rejects, and it gives me pause when I consider the amount of old cruft and failed experiments I’m keeping in my file. I’d free up a lot of bits if I just deleted it all; on the other hand, I’d miss opportunities to use new skills when I acquire them.

This picture was taken in 2009, when I didn’t know much about combining multiple exposures in post. I tried to make it work and then let it sit for two years, until I had more patience. (I didn’t yet have a graphics tablet, though, which would have made the whole process ten times easier.) A little tweaking and cropping to a favorable aspect ratio produced something that, I think, captures the tranquility and sense of mystery the cloudy moonlit scene conveyed to me almost three years ago.